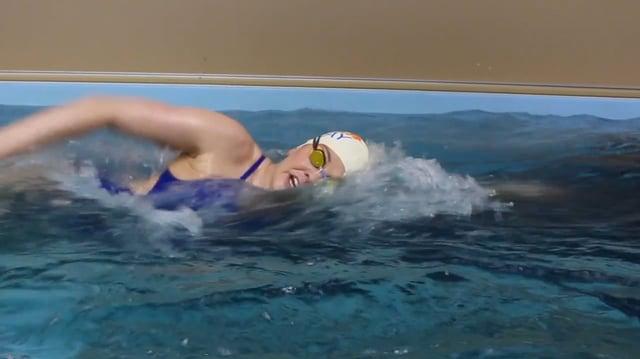 "Having a second chance at reaching my Olympic dreams is a dream come true on its own." - Chloe Sutton

USA Swimming will send Kirsten Groome and Chloe Sutton to compete for the lone 10K open water spot available for the U.S. at the Beijing Test Event.

Catherine Vogt has also been named the coach for the pair heading to Beijing on May 31, 2008.

"Having a second chance at reaching my Olympic dreams is a dream come true on its own," Chloe Sutton told Swimming World. "I've become a different person since open water trials in Florida. I'm much stronger and more mature now. I'm honored to be able to represent the U.S., and I'm very excited and confident to do my very best in Beijing."

It will be an incredible "race-within-a-race".

General Accolades: Was nominated for a Golden Goggle Award for 2006 Breakout Performer of the Year Meet Honors: 2005 Spring Nationals Female Rookie of the Meet

Pet(s): Two cats (Coco and Cookie) at home with parents... "When I moved away in search of a better team (CCA), I got a kitten named Squirt, which is the name of the baby sea turtle in 'Finding Nemo.'"

Hobbies Outside the Pool: Surfing, body surfing, writing Ultimate Way to Relax: Bubble baths and naps Most Influential Person: Dad ... "He is the strongest, toughest and most honest person I know."

Swims 10-15,000 yards per day, 4 hours a day, 6 days a week More: When she was little, wanted to be a marine biologist ... loves to cook More: The Sept. 11, 2001, attacks had a big impact on her life because her dad was in the Pentagon that day ... "I appreciate him so much more." More: "I am a strong Christian and that is a big part of my life." Favorites: U.S. city: Santa Barbara, Calif. ... int'l destination: Australia ... summer activity: going to the beach ... movies: Facing the Giants, Anchorman, Down with Love, Blades of Glory ... t.v. shows: House, America's Top Model, Project Runway, American Idol

Community content is available under CC-BY-SA unless otherwise noted.