Dara Grace Torres (born April 15, 1967) is an American swimmer, the first swimmer from the United States (also known as USA) 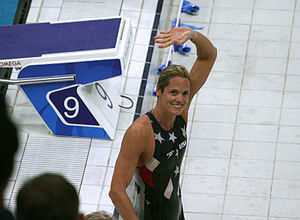 Torres has been proactive about addressing suspicions of drug use, asking the United States Anti-Doping Agency to give her any drug test it could devise. Since March she has had her blood tested at least a dozen times as part of a USADA pilot program. "I want to be an open book," she says. "I want people to know that I'm 41, and I'm doing this right. I'm clean." Links: http://www.nbcolympics.com/blogs/blog=alanabrahamsonsblog/postid=148601.html#believing+dara

First American to swim in four Olympics ... most decorated female athlete at the 2000 Olympic Games with five medals ... oldest U.S. swimming gold medalist in history ... former world record holder in 50m free ... American record holder in the 50 and 100 scm free ... placed first in both the 50m and 100m free at the 2007 Conoco Phillips National Championships

"Extreme Step," a segment of the Discovery Channel's science and technology show, "The Next Stop" ... has worked on-air for ESPN, TNT and Fox News

Parents: Edward and Marylu Sibling(s): Four brothers: Mike, Kirk, Rick and Brad ... one sister: Lara Sports Played Before Swimming: Volleyball, basketball Hobbies Outside the Pool: Playing with her daughter, Tessa, playing sports Most Influential Person: Father ... "he worked hard and was very dedicated." More: Has one daughter (Tessa) who was born in April 2006 ... "right now this little girl has all my attention, and I think we're both liking that right now!" ... serves as a spokesperson for the Tae-Bo workout videotapes ... ... became the first Olympic athlete to appear with supermodels in Sports Illustrated's swimsuit issue in 1994 ... was part of President George W. Bush’s Inaugural ceremonies as a speaker and host at various activities Favorites: Movie: Chariots of Fire ... t.v. show: CSI ... music: classic rock

First American to swim in four Olympics and five Olympics

Retrieved from "https://aforathlete.fandom.com/wiki/Dara_Torres?oldid=18080"
Community content is available under CC-BY-SA unless otherwise noted.