A for Athlete
Register
Don't have an account?
Sign In
Advertisement
in: IPad stub, Wellness, Swimming,
and 3 more 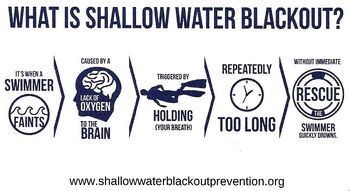 Deaths in 2011 in Staten Island in New York

A U.S. Navy SEAL hopeful and his friend, an off-duty lifeguard, died while doing underwater drills that can lead to what is often called Shallow water blackout. The two were in a pool just 3.5 feet deep. No one realized anything was wrong until their limp, unconscious bodies were noticed beneath the surface.

“Because the swimmer has a low oxygen level at the time of the fainting, brain damage occurs within a couple of minutes, and death is very likely,” a doctor warns in a recent public service announcement. Afterward, Olympic gold-medalist Michael Phelps urges coaches to end the risky swim-team tradition of marathon breath-holding workouts.

U.S. Centers for Disease Control and Prevention published a New York City Health Department study May 22, 2015, on “dangerous underwater breath-holding behaviors.” The study said New York City's ban on long breath-holding, passed with little fanfare in 2013 after the Staten Island deaths, could serve as a model for other cities.

Community content is available under CC-BY-SA unless otherwise noted.
Advertisement