A for Athlete
Register
Don't have an account?
Sign In
Advertisement
in: Sport in Beijing, Sports venues in China, Swimming venues, Venues of the 2008 Summer Olympics

The Beijing National Aquatics Center (Template:Zh-ts), also known as the Water Cube (水立方) or abbreviated [H2O]3[1], is an aquatics center that was built alongside Beijing National Stadium in the Olympic Green for the 2008 Summer Olympics. Ground was broken on December 24, 2003. 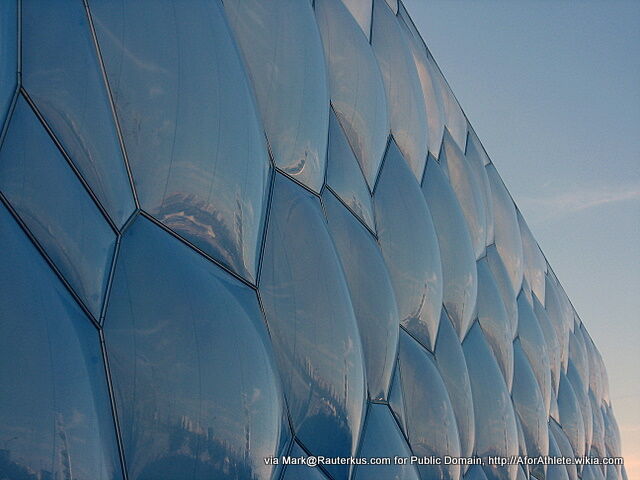 The Water Cube was initially designed by PTW Architects [2], CSCEC International Design and Arup with structural Engineers Arup conceiving the structure. The structure was built by CSCEC (China State Construction Engineering Corporation). Comprising a steel space frame, it is the largest ETFE clad structure in the world with over 100,000 m² of ETFE pillows that are only eight one-thousandths of an inch in total thickness,[3] The ETFE cladding allows more light and heat penetration than traditional glass, resulting in a 30% decrease in energy costs[3].

The outer wall is based on the Weaire-Phelan structure, a foam (structure formed by soap bubbles).[4] The pattern is formed by taking a slice through the foam, and it was chosen in preference to the Kelvin foam because the more complex Weaire-Phelan structure results in more irregular, organic patterns than slices through the regular Kelvin foam.[5]

The Aquatics Center will host the Swimming, Diving and Synchronized Swimming events during the Olympics. The Water Polo was originally planned to be hosted in the venue but has been moved to the Ying Tung Natatorium. Template:-

Community content is available under CC-BY-SA unless otherwise noted.